Through Research and Innovation

Docker Swarms, what are they?

Before the Swarm - The Good Old Days

In the "Good Old Days", computers where physical things... real tin... and you had either the Personal Computer or the Mainframe.

PCs were "small": they had 1 CPU (well, modern ones have more), limited RAM (16GB is a lot), and realtively small storage-systems (a couple of TB if you're lucky.) PCs were designed to be used by 1 person at a time. PCs sat on your desk. PCs became portable, then ultra-portable, and even evolved into hand-helds (take another look at the specs for your smart-phone!)

Mainframes, on the other hand, were designed to be a centralised resource, and used by multiple people... simultaniously. Mainframes have a large number of CPUs (128 or more), masses of RAM (128GB), and vast tracts of storage (multiple terrabytes, after RAIDing). Mainframes have redunant Power Supplies and hot-swap everything. Mainframes just run - forever!

The upside of the mainframe is that there is a huge pool of resources available, the downside is that someone else may be using them. Oh, and that one person's bad code can wipe out the entire machine.

The upside of the PC is that all the resources are yours, the downside is that those resources are limited. Oh, and that each machine can be different.

Before the Swarm - Trading the Real for the Virtual

One of the techniques used to merge the huge pool of resources from the mainframe with the isolation of the PC was to create "Virtual" computers within one physical machine. There are a number of techniques for this:

Before the Swarm - The Cloud

The Cloud can be considered a Virtual Hosting system - its a lot of smaller bits of tin joined together to pretend to be one big system, designed to then provide resources for Virtual systems to run.

Before the Swarm - Docker Containers 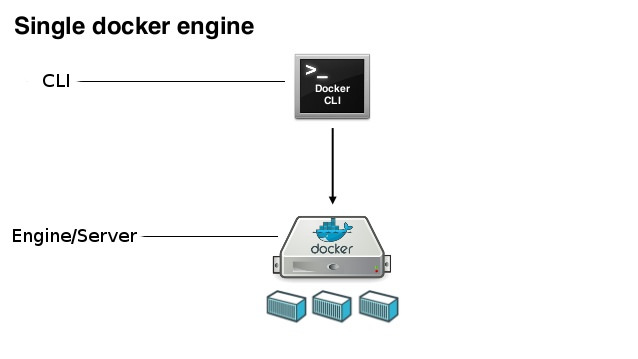 I assume you kinda know about Docker Containers - jumping to Swarms without that knowledge is going to be hard work!

The main point to remember is that Docker Containers run on machines - be they real or virtual.

Before the Swarm - Docker Compose

In many cases, a complete application was made up from multiple Docker Containers, so the idea of docker-compose was born.

This uses a single compose file to describe all the Docker Containers needed for the application to run, and how to tie them together.

A Compose file lists all the Containers in the app, and how to build them:

Note that there are different versions of compose, version 2 is generally for single-host installations, and 3 is for Swarms.

We only need to expose ports if the service is going to be used by the outside world (so the ui has a port, but the rest don't), and connections are done across the internal network (so the database connection would be dbi:Pg:host=db, and the http connections from ui to app2 would be http://app2/.

We can then manage applications thus:

Remember - these are all still running on the one host.
(ref: https://docs.docker.com/compose/compose-file/compose-file-v2/)

What is a Docker Swarm? 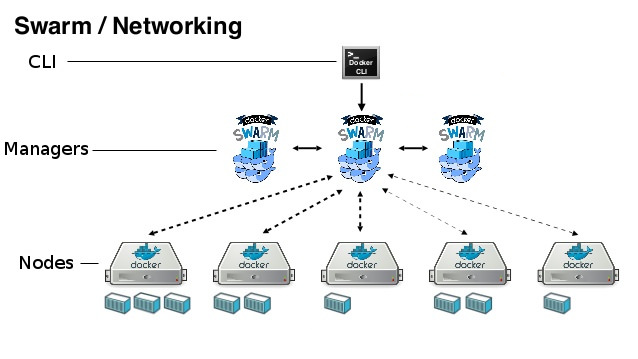 A Docker Swarm is essentially a Docker-Compose'd application running over multiple machines. Each machine is called a node.

A Docker Swarm requires a manager node and probably some worker nodes - and creates a space for Containers to run which is [mostly] independent of the underlying machines.

A Docker Swarm is designed to run several containers (probably more than once), and provide a form of redundency via having Containers migrate from one host to another within the swarm. This is sometimes referred to as a High Availability Cluster.

To avoid confusion, what was a Docker Image, became a [Docker] App, and is here referred to as a Service. Each running Container of a Service is called a Task.

When a brand new swarm is created, the initial node is a manager node. This creation process tells you how to join other nodes into the swarm.

Creating the new node is not part of Docker - and thus not explained here.... however we assume they exist, and you can ssh into them

To add a node to a swarm:

To leave a swarm

Working with nodes in the swarm

Nodes can also have labels (which is useful when assining containers to nodes): docker node update --label-add type=world somenode-a will add a label to the node somenode-a.

Nodes can also be made manager/not-managers here too: docker node promote/docker node demote

For Containers to talk to each other across a swarm, they need to be part of an internal network.

Docker networks have a SCOPE and a DRIVER

Any Docker host (Swarm or otherwise), gets three networks authomatically: bridge, none, and host - and unless you specify otherwise, every Container will connect to the hosts bridge network

At ceration, every Docker Swarm will get an overlay network called ingress - this is how the containers on the various hosts talk to each other.

NOTE: When an overlay network is created in a Swarm, it spans multiple nodes, and ties together those Services which are connected to it (and only those Services)

From a manager node:

The ingress overlay network provides one very important task: it enables any node in the network to respond to a request on a published port, and pass that request onto an active task - whether the task is on that node or not.

For more details on routing & load-balancing, https://docs.docker.com/engine/swarm/ingress/ is a good starting reference.

Docker Stacks work almost the same as Docker Compose, except we can also define some deploy details (such as networks to use, and the number of replicas to run.)

Docker Stacks are an overarching term to encompass the full set of Services... a single Stack will usually hide multiple Services, each of which can be running multiple replicas of a particular Container.

When a Stack is deployed, then the nodes the Tasks are on can be specified.

When a Stack is deployed, then the networks for the Tasks can be specified.

Note: when deploying a stack, services are named stack_app, rather than the dir_app  of Docker Compose.

Tip: We have found that starting up a new Task on a node can take some time if that Image needs to be pulled from a Registry, so we tend to pre-pull all Images onto our nodes.

One of the whole advantages of Swarms is that you can Scale according to need. Scaling covers two things:

Whilst Docker itself does not particularly control the former, it absolutely manages the second.

Changing Node Status depends on the technology provider, so is not something you can do with Docker commands.

When updating a node, the common method is to Drain the node first (to push all Tasks off the node), then update it.

The great advantage of a Swarm is that any particular Task can be replicated a number of times. There are two variations on replication, which is defined at create or deploy time:

When scaling an image, we define the number of tasks to run, not an adjustment: docker service scale frontend=50

Volumes are an issue in swarms.

With non-swarm Docker, Volumes are Mounts are bits of host storage conencted into the container to provide persistent storage.

When we switch to Swarm Mode, the Task can be started on any available Node, and could migrate to another Node - and a traditional mount can't cope with that.

This document cannot go into all the permutations & ramifications when it comes to persistent data storage & off-container Mounts - however the output of docker inspect service will include a section on mounts (if there are any) - eg:

Let is make up an example.... let us create an MORG (Multiplayer Online Roleplaying Game.) The architecture has five components:

We know that the Web Server (the UI) and the Nexus need to talk to the outside world, so whatever nodes those services run on need to be Bridged to the Host, and have access to a public IP. We also want to isolate the Player Engines from the rest of our system (just in case someone hacks in), so we seperate them onto two Overlay networks: 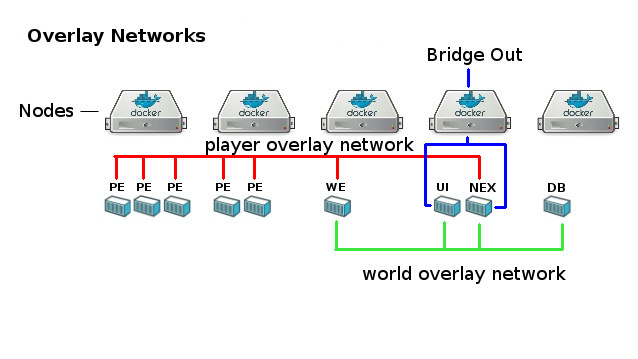 Like any system, an application on a swarm can go wrong.... but what can you do about it? How do you find out what's going on?

As mentioned above docker node ls will tell you what nodes are in the swarm.

Let me tweak our MORG slightly: lets have another node, and run a second UI on it.... this would mean our MORG could look like this:

We have 10 nodes in the swarm: 3 manager nodes and 7 worker nodes: we've named one as a Database worker, a pair of Application workers, and the remaining 4 are general workers. We also have worker-0 Paused, and worker-2 Down.

We can also look at what's running:

(note we are showing 2 replicas for the ui service in the world stack, even though the diagram doesn't)

We can see that there are two stacks running: one called world and one called player - and we can deduce that the stacks seem to follow the networks.

So where are the services actually running?

Partly, this doesn't matter - that's the point of the swarm: the manager nodes load-balance Containers across the worker nodes... but if you really want to find out:

Lets say we want to change the number of replicas for the ui: docker service scale=n world_ui. If you scale to 0, you effectively shut it down, if you ramp it up, it's gets spread across the worker Containers.

Logs are a challenge under Docker - mostly logs are streamed into the aether, and not kept. That stream, however, can be tapped into.

How many services of a particular name are running, on which nodes?

This is a common question, as it's a good indicator of Load (question: how many of your Containers can you run on your nodes, before things start to slow down/break down?)